Six years ago the US citizien disappeared without a trace after visiting a sauna in Vienna. Now, a murder investigation is finally on its way.

There are stories that just don’t make sense. Where contradictions remain, no matter how you look at it. Like the story of Aeryn Gillern, US citizen, who lived in Vienna, worked at the UN and was gay.

When Gillern disappeared on the evening of the 29th of October 2007, he was 34 years old.

On that day, more than six years ago, that man ran out of the Kaiserbründl, a discrete gay sauna in Vienna’s first district, completely naked. Since then he is gone. „He jumped into the Danube Canal to commit suicide“, is was police said after the incident. But inconsistencies and doubt remain until today.

Gillern’s case is one of the most mysterious in recent Austrian history – however police never cared much about him. For years now critics, such as members of the Green Party, and Gillern’s mother Kathy, have accused the investigators of sloppiness, indifference and homophobia. In 2008 the “Falter” exposed numerous and severe shortcomings that took place during the investigation. 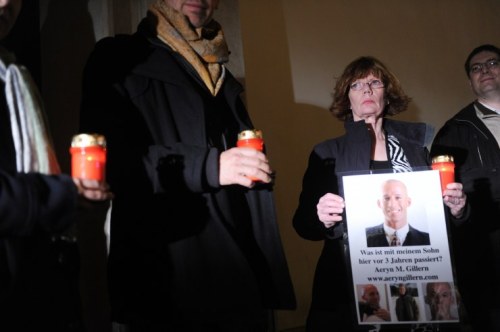 Gillern’s mother Kathy and others holding a vigil in front of the „Kaiserbründl“ in Vienna in 2013 (Photo: Corn)

Now things are about to change. “We are re-opening the case and looking at every detail”, says Mario Hejl, spokesperson of the Federal Office of Criminal Investigation. Before that, the Ombudsman Board re-evaluated the case. On the part of the police, the new Cold Case Squad is now responsible for the case. This department, founded 2010, is using special investigative methods to deal with complex cases that date back some time. Among these are the cases of Julia Kührer and Natascha Kampusch.

Is is possible, that the mysterious disappearance of the US citizien was no suicide at all, but a crime case? Even after six years time, some heavy weight evidence is pointing in that direction. For example they never found his dead body in the Danube, which is very implausible. Furthermore there was a dubious quarrel at the sauna right before Gillern’s disappearance. Details about that were never brought to light, as the owners of the sauna stay silent until today.

And it’s not only the quarrel, and the absence of a dead body that are leading to more questions, it is also Gillern’s run through the City Centre. No one saw the running, naked man – 6 feet tall, muscular, with a shaved head – in the very lively streets of the first district. Only two students from Germany came forward in 2008, after an article in the „Falter“, who had seen Gillern running by Stubentor. They thought he had just lost a bet.

Apart from the low number of witnesses it is the chronology of events from that evening in October 2007 that doesn’t add up. At exactly 8:21pm a fisherman at the Danube Canal heard a splash – perhaps Gillern jumping into the water. But that is 90 minutes after he had left the sauna. And the distance between the Kaiserbründl and the Danube Canal is only about half a mile.

„We want to resolve these oddities now“, says police spokesperson Hejl. He is asking potential witnesses to get in contact with the Federal Office of Criminal Investigation.